KSI is a British YouTuber who is probably best-known to non-YouTube watchers like myself for his rivalry with Logan Paul. Or maybe it was Jake Paul. I don’t know and I don’t care. Regardless, the rivalry resulted in two Pay Per View boxing matches that were indeed watched by millions of people around the world. Tens of millions if you count the illegal streamers. I did not watch either match and I have zero interest in looking up the results. The main loser in my view is society, for getting to a point where two random YouTubers are able to convince millions of people to pay good money to watch them box.

After taxes KSI probably walked away with around $2.5 million.

That’s $2.5 million earned off two extremely difficult physical events orchestrated with the help of hundreds of people over thousands of combined hours.

Fast forward to the present and KSI just flushed $2.8 million down the toilet in a day thanks to a horrifically-timed crypto bet. Whoops.

Luna is a cryptocurrency that is somehow associated with something called Terra. That’s as far as I will go on that. Not investing another ounce of my life trying to understand or care about Luna or Terra.

Between January and April, the price of Luna mostly fluctuated between $80 and $100 per… coin? Per Luna? Per Loon? I don’t know and I don’t care. There was a pretty brutal dip for most of February when the price dropped into the $50s.

Below is the general price range of a single Luna recently:

On May 10 the slide continued. Between midnight and 11am, Luna was firmly in the $30 range. This is the range when KSI decided it was time to buy the dip. We know this because on May 10 KSI Tweeted that he bought 100,000 Luna and in a later Tweet he shared a screenshot showing those 100,000 Lunas cost him…

Unfortunately for KSI, by the end of the day on May 10, a single Luna was trading for around $8.

But the bloodbath was just getting started.

Below is a one month price chart of Luna. I’ve added a line to mark the point where KSI invested $2.9 million: 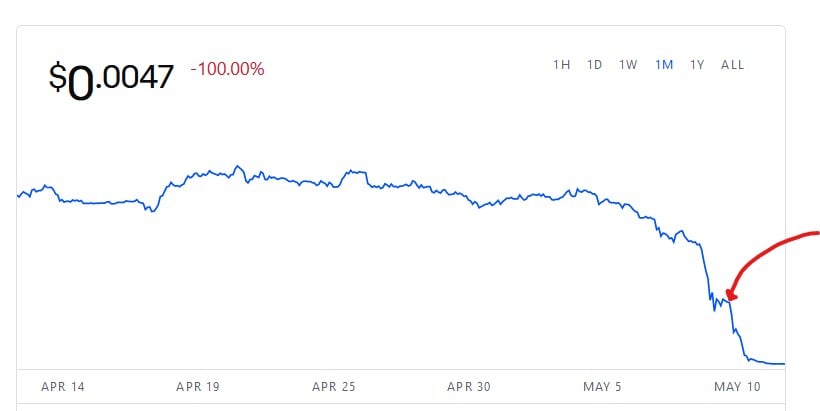 That’s not a typo. I did not forget any zeros. From $2.95 million to $470 in about a day. That might go down in history as one of the most poorly-timed investments of all time.

Something tells me we’ll be seeing a KSI/Jogan Paul rematch announcement in the near future!

Big Tech Companies Are Starting to Freeze Hiring. Should You?