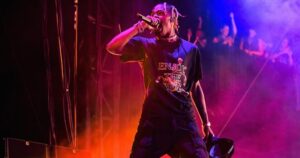 Travis Scott has landed yet another lawsuit for his wild performances, this time his Rolling Loud Miami performance in 2019 being in the spotlight, where he allegedly stirred up a stampede.

According to documents obtained by Rolling Stone, a May 10 complaint alleged Scott was told by police to cut his performance “due to the crowd becoming dangerous and uncontrollable.”

Filed by Marchelle Love, and on behalf of a child and guardian initialed U.M., the complaint reportedly places blame on Scott for inciting the crowd to form mosh pits while his performance was stopped which caused confusion and panic, resulting in “multiple stampedes.”

Much like his fatal 2021 Astroworld Festival, Scott stands accused of continuing to encourage chaos in the frenzied crowd despite being able to see fans being crushed.

“Despite the fact that Travis Scott was aware of and could clearly see concertgoers being injured, suffocating, losing consciousness, fighting and being trampled, he continued his performance while authorities were forced to attempt to render aid to these injured concertgoers,” claimed the documents.

A representative for Scott told the outlet that this lawsuit is nothing but a “blatant, cynical attempt to attack” the 31-year-old rapper. They assert this is a false report that actually involved a “shooting mid-show, completely unrelated to Travis’s performance.”

Love alleges she suffered unknown “permanent” and “severe injuries” that consisted of “bodily injury and resulting pain and suffering, disability, disfigurement, loss of capacity for the enjoyment of life, expense of hospitalization, medical and nursing care treatment, loss of earnings, loss of ability to earn money, and aggravation of a previously existing condition,” per the complaint.

The filing also names Sequel Tour Solutions, LLC and SLS Consulting, LLC, where Love seeks a trial jury and over $30,000 in damages.

In addition to being the defendant to roughly 500 lawsuits stemming from the Astroworld tragedy, as well as a new filing of nearly 5,000 claiming injuries, on May 12, an additional wrongful death suit came from a woman who alleged she suffered a miscarrage after injuries sustained at the festival.

Scott has persistently rejected being responsible for the tragedy.