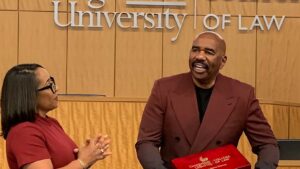 Steve Harvey spoke for two hours during a keynote address at a Georgia State University law class in Atlanta, touching on his discontent about the Will Smith-Chris Rock Oscars slap.

An audience of over 100 law students listened to the comedian discuss the entertainment business, his new judge show, the fear of failure, and, of course, the infamous slap.

He shared that although he is a man of God, his reaction wouldn’t have been as courteous as Rock’s, essentially saying he would’ve thrown hands.

“I’m a Christian, but I’m really undeveloped. I don’t have high-level Christianity. On a scale of 1 to 10, I’m like a 2. That’s the level of Christianity I can work on,” said the Judge Steve Harvey host. “You slap T.D. Jakes, he’ll turn the other cheek. You slap me? If you sit back in your seat, Jada would have to move out of the way. That’s the type of Christian I am.”

He went on to say Smith knew he wouldn’t be punished because it happened on the Oscars stage during the ceremony.

According to the fashionista comic, the slap was a “punk” move. “I lost a lot of respect for him,” Harvey said.

Harvey also shared personal stories of determination with the law students, revealing that the key to his success is hard work.

“My life is a trip, man,” he said. “I’m just a hood boy. I come from the dirty. Very few will give it to you the way I give it to you. People often don’t want to tell you the side that got them there. That’s my specialty.”

While Rock didn’t press charges, Smith was banned from the Oscars for a decade and resigned from the Academy of Arts and Sciences. The actor accepted the decision, and has apologized multiple times since.

In an attack during Dave Chappelle’s standup set at the Hollywood Bowl Wednesday, in which a guest bum-rushed the comic onstage, Rock grabbed the mic and asked, “Was that Will Smith?”