Today is Allen Iverson‘s 47th birthday. On this day in 8 years, Allen will finally inherit an infamous $32 million trust fund. The trust fund was established by Reebok back in 2001. The trust fund’s distribution date is June 7, 2030. AKA, Allen’s 55th birthday. Below is a countdown clock to Allen’s inheritance date:

How did this arrangement come to be? Was this actually a good financial move? Will Allen get the full trust, or does his ex-wife get half? Let’s look for The Answer.

Let’s start with that first question:

How Did The Trust Fund Get Set Up In The First Place?

Over 15 seasons in the NBA, Allen earned $155 million in NBA salary and roughly $50 – $100 million from endorsements. That brings his total career earnings up to $200 – $250 million. The vast majority of his endorsement income came from shoe company Reebok. Allen signed his first Reebok contract in 1996 right after the 76ers took him with the #1 pick of the NBA draft. That first contract was worth $50 million over 10 years, aka $5 million per year.

After winning the 2001 NBA MVP award, Allen and Reebok convened to talk about the future. Even though he still had 5 years left on that original deal, Reebok wanted to be in the Allen Iverson business forever.

So a new deal was struck. A very unique deal thanks to three important terms:

2) Allen would continue earning $5-10 million per year for the remainder of his professional career.

3) Reebok would set aside $32 million in a trust fund for Allen to inherit on his 55th birthday, 29 years in the future at that point.

How Did The World Learn About The Trust Fund?

Despite earning $200 – $250 million during his career (before taxes), Allen was broke a few years after retiring.

Well, throughout his career Iverson’s profligate spending was the stuff of legends, even by NBA standards.

Instead of maintaining a more-common 3-5 person NBA entourage, he was known to travel with an entourage of 50 people. He showered these same people with luxurious jewelry, expensive cars and exotic vacations. He showered himself with jewelry, cars, homes and vacations.

He was also a bad gambler in both senses of the word. He gambled a lot and was not particularly good at it. Iverson was known to drop over a million dollars gambling in single evenings in Las Vegas and Atlantic City.

Allen’s financial problems came to light after his wife Tawanna filed for divorce and demanded custody and full support for their five children. In a December 2012 court filing, Iverson told a judge that his monthly income was $62,500. Nice, right? Well, unfortunately his expenses were $360,000. Leaving him $300k in the hole every single month. An annual debt accumulation of $3.6 million. Here’s how the filing broke down some of Iverson’s expenses:

Tawanna knew Allen was cash poor today, but she also knew about the Reebok trust fund. So she petitioned for a judge to give her half of the $800,000 annual pension and half of the $32 million trust fund when it is distributed in 2030.

That’s how the world learned of the trust fund’s existence.

There’s actually some debate today over whether or not Allen and Tawanna ever fully divorced. I have been under the impression that they did get divorced and the fund was split. I pointed this out on this day two years in response to this tweet from sports writer Darren Rovell:

“Allen Iverson turns 45 today. Ten years from today, on his 55th birthday, he receives a $32 million trust fund as part of a the lifetime Reebok deal he signed in 2001.” 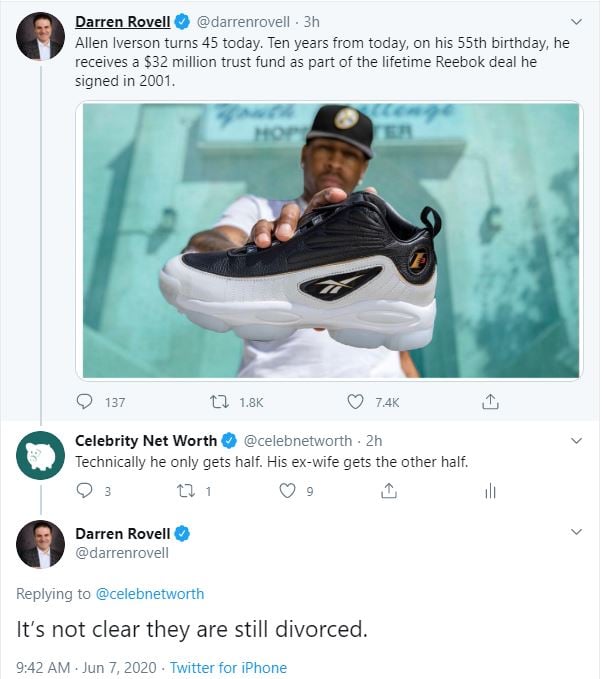 Interesting twist! So maybe Allen will get the full $32 million after all? But that begs another question…

Was The Trust Fund Actually A Wise Choice?

A lot of people look back on the trust fund today and call it a brilliant financial move. People also love to compare it to Bobby Bonilla’s famous multi-decade contract.

For those who are unfamiliar, in 1999 the Mets owed Bobby $5.9 million. They also wanted him off the team. To make a smooth exit, Bobby negotiated a deal where  he gave up that $5.9 million and instead would earn $29.8 million from the Mets in 25 annual installments. This is why the 57-year-old Bobby Bonilla will earn $1.2 million per year from the Mets until 2035 – when he will be 72.

Mets owner Fred Wilpon loved the deal because at the time he was one of Bernie Madoff’s biggest clients and was therefore used to earning double digit annual returns on his money. Over 25 years, $5.9 million invested with Madoff would grow into far more than the roughly $30 million they would pay out over time.

Obviously, that didn’t happen. As we all know now, Madoff was running a massive Ponzi scheme and those double-digit annual returns were totally fake. Wilpon personally lost a good chunk of his net worth from the scandal. He nearly lost the Mets.

Financially speaking, it also technically wasn’t a great deal for Bobby Bonilla. Had Bobby taken $5.9 million in 1999 and gotten a 5% annual return (which wouldn’t have been guaranteed), by 2035 he would have $34 million.

Similar arguments can be made with Iverson’s trust fund. Yes it’s nice for Allen to earn $800k a year with a huge retirement fund decades in the future, BUT consider this:

If you think that’s unlikely or hard to achieve, between January 2001 and today, with dividends reinvested, the S&P has had an annual average return of 6%.

Bottom line though, hindsight makes us all amazing investors. Maybe this was the best deal for Allen personally? He gets a great annual income by any standard, while having a major windfall to look forward to in his golden years. Risk free. Doesn’t get much better than that!

Consumers Are Starting to Shop Like It’s 2019. What That Means for Your Inventory Strategy