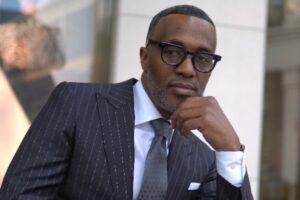 A GoFundMe page that was set up to accept donations toward funeral services for recently deceased social media relationship agitator Kevin Samuels was reportedly not sanctioned by his family.

TMZ is citing a source familiar with Samuels’ family who said that they did not create it and had no interest in keeping the funds. Everyone who donated will get their money refunded. The page has also been taken down.

As previously reported by BLACK ENTERPRISE, Pastor Jamal Bryant condemned Samuels and his message even after his passing from the pulpit at New Birth Missionary Baptist Church last Sunday.

Bryant has reportedly retracted those statements.

Samuels reportedly had a net worth of $4 million.

The self-proclaimed relationship guru died May 5 in his apartment in the company of a woman who desperately tried to save his life. In an 18-minute phone call, the woman frantically told 911 that she believed the 57-year-old man was suffering a cardiac event.

Known for his controversial remarks, Samuels went viral just days before his death after calling unmarried woman over the age of 35 “leftovers.”

“Kevin Samuels has made a career off of shamelessly disgracing Black women for profit. He emboldened the most toxic individuals to project tired and harmful narratives about Black women. Dead or alive, what a disgraceful life to live. That’s all I’ve got for that misogynist,” writer Ernest Owens wrote on Twitter following Samuels’ death.

Two weeks after his death, Samuels made his acting debut on the FX series, Atlanta in an episode called Rich Wigga, Poor Wigga directed by the series creator Donald Glover.

Invest with Confidence with Outprfrm’S Guidance